1. Tagging (most often by DefaultFolderX) reference files while saving them to the Downloads folder; and

2. [for scientific articles and other citable pdf documents ] renaming and automatic archiving by Papers2 (see more details here and here) ; or

3. [for other reference files such as media] automatic archiving in a special folder system by Hazel  (see more details here).

By the way, if you don’t know what Hazel  (part of the Macademic Ninja Kit) is, listen to this episode of MacPowerUsers! This eye-opener, one of their best ever, not only changed the way I handled my own Mac, but also was among the strongest prompts to start this blog.

My Hazel rules, essential for this workflow, were initially triggered by name modifiers (such as @a for reference files) and later – by OpenMeta tags. Any file tagged  ‘reference‘ was automatically archived by Hazel in the relevant folder and any file tagged  ‘papers‘ triggered another Hazel rule that opened it in Papers2. Subsequently Papers2 would match, rename and archive the document according to my preferences. (Newer versions of Papers2 can automatically import all files added to a specific folder and thus a Hazel rule is not necessary for workflow (2)).

Of course, I use tagging not only to indicate how I want the document to be processed but also in order to easily find it when needed later.

Now that OS Mavericks has its own tagging system I have started assigning Mavericks tags to my reference documents. This required revising the Hazel rule for reference files as follows: 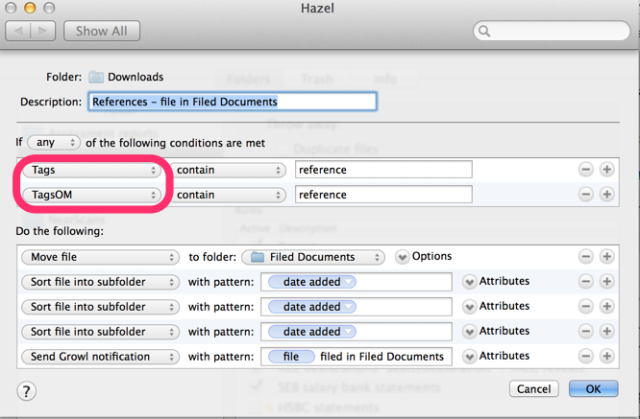 Aleh Cherp is a professor at Central European University and Lund University. He researchers energy and environment and coordinates MESPOM, a Masters course operated by six Universities.
View all posts by Aleh Cherp →
This entry was posted in Files, Tags and folders, Workflows and tagged Hazel, Mavericks, OpenMeta, Papers. Bookmark the permalink.